The Kotahi Aviary, a leading New Zealand shore plover/tūturuatu breeding facility, is set to release its first group of offspring into the wild population on Waikawa Island.

“The first shore plover release is always going to be a special time as it signals that we have been successful in breeding chicks at the aviary. To see recent growth in the population is a reflection of what can be achieved through investment in captive breeding and release programmes,” he said.

The five shore plover will join 82 shore plover residents on Waikawa Island, a predator free island off the coast of Mahia in the Hawke’s Bay region.

The Kotahi Aviary currently holds 16 of New Zealand’s critically endangered shore plover. The adult shore plover population in and around New Zealand remains critical at approximately 250 individuals, making it one of the world’s rarest shorebirds. The Kotahi Aviary, established in 2018 is a long-term partnership with Department of Conservation, Cape Sanctuary and Kotahi.

Department of Conservation Director General, Lou Sanson said the survival of tūturuatu relies on the ongoing support of captive breeding facilities. It’s exciting that these first young tūturuatu from the Kotahi Aviary at Cape Sanctuary can now be released into one of the few wild populations.

The shore plover/túturuatu is small and stocky, mainly mid-brown and white in colour. This critically endangered shorebird is found only on a few predator-free islands in the Chatham Islands and around mainland New Zealand.

Kotahi Chief Executive David Ross said we continue to be committed to investing in New Zealand’s wildlife for future generations to enjoy.

“We believe New Zealand business has a role to play in working with local communities to regenerate our New Zealand native endangered species,” he said.

To be capable of being released onto an island, the young shore plover have to reach important growth and weight milestones, make it through the delicate incubation and hand-rearing process, learn to forage on different types of live invertebrates as well as learn to eat the captive diet, fledge successfully and learn to interact in a flock – which can be a social minefield for small birds with big personalities. After meeting these milestones, at several months old they are ready to be released, which must happen before they mature so they can ‘site-fix’ on the release location.

The shore plover were blessed at the Kotahi Aviary and will be blessed on Waikawa Island before their release. The birds will spend four-six days in an aviary on Waikawa Island, helping them acclimatise to the new environment, before being let out to roam the island freely and join the resident population. 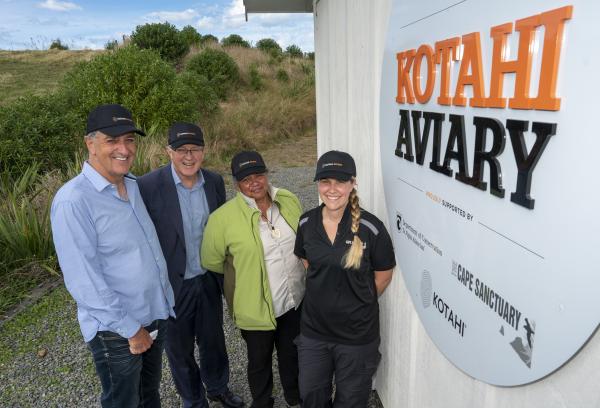